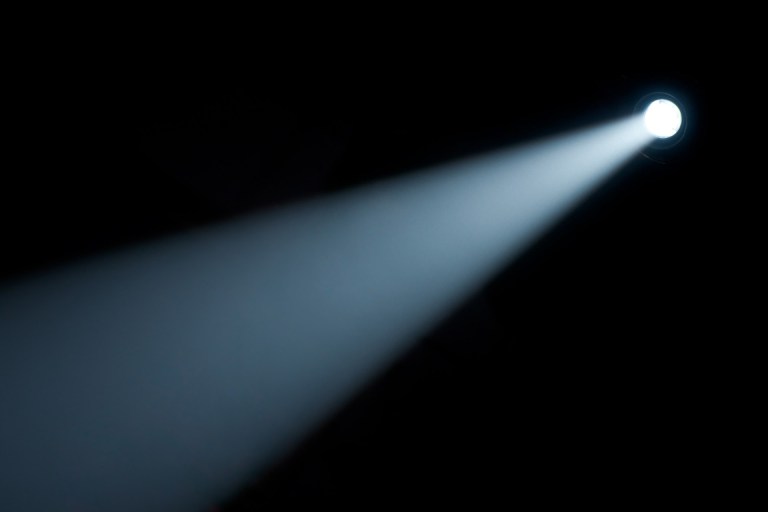 Open our eyes, Lord… we want to see Jesus.

Scripture has a lot to say about blindness: one of the promises revealed by the prophets of old was that the Messiah would come to give sight to the blind; in fact, the whole purpose of God revealing himself through his covenant with Abraham was so that his chosen people would be a light to enlighten the nations; a great light for those who were walking, living in the dark.

Even if we’ve heard these readings a thousand times, though, it’s absolutely critical that we allow ourselves to hear them again with fresh ears… to read them again with fresh eyes, eyes that are opened to see Jesus at work.  After all, no apostle or missionary risked life and limb for the sake of a history text of what Jesus did… No, the good news of the Gospel is alive, and the one it proclaims – that Lamb who was slain who now reigns in glory – is not just a figure of history to teach us good moral lessons.  He’s at work, even now, as that good news goes forth into all lands, even as Christians around the world are gathered in their homes; he’s at work today, as eyes are opened and light begins to shine in the darkness.

Who Caused this Blindness?

We know how this healing goes.[1]  The man who has been blind from birth is sitting along the road, minding his own business.  Then, the disciples start to talk amongst themselves, pretty embarrassingly, wondering “why is that guy blind?”.  It’s kind of like when you take a young kid out to the grocery store… you know, the first time the child really notices someone without an arm, or with a scar on their face.  You, the parent, try to answer them as quickly and quietly as possible, hoping, praying that they’ll just be quiet and that the person in line in front of you somehow didn’t hear.

…But that’s the scene: the disciples, walking down the road, talking amongst themselves about why this guy is blind.  And, we might say, they offer some common, but childish suggestions:  ‘Jesus, he was born blind because his parents were sinners, right?’  ‘Oh, Jesus, I think he was born blind because his father broke the commandments!’  ‘Well, I think it’s his own fault; I think he sinned while he was a baby’.

And Jesus patiently settles them down, and then sheds light on the situation: ‘guys’, I imagine him saying, ‘that’s not how it goes’.  No one’s sin caused this; it’s not like he somehow got what he deserved.  Blindness, sickness, plagues, even pandemics are just part of the reality of a broken, fallen world; a world in which people have the freedom to choose love and sacrifice over pride; free to choose to worship the God who made it all, or free to live under the illusion that we are somehow in control.

No, Jesus says, this man being born blind, like so much of the illness and brokenness in the world, isn’t caused by anyone.  But, in every broken situation, there is an opportunity for God to work even the worst situations together for good for those who love him, as he works out his eternal purpose of calling us to share in his eternal life.[2]

And then, without even asking the man minding his own business on the side of the road, Jesus spit on the ground, wiggled his finger around in it, made some mud, and wiped it on this guy’s face… so much for hand sanitizer and social distancing!

Then he tells the man to go wash his face; and suddenly his eyes were open.

It’s remarkable; sometimes God wants us to ask for healing, like the paralyzed man lying for years at the pool, where Jesus stopped and asked the man if he even wanted to get well, before telling him to simply pick up his mat and go.  But, this time, the gift of God came without any request or act of faith on the part of the man, other than washing this stranger’s spit off his face, which I’m sure he would have done anyway.

God just did it, while the man simply washed his face, as he was expected to do.

And, I think that’s the point.

The brokenness, the blindness, the illness, the pain, the injustice are part and parcel of life in a fallen world.  Any relief from physical suffering is, by nature, only temporary until that day when God restores all things and makes them new, sharing his life and light with those who have chosen to call him Lord.

Jesus never promised to protect and keep us from physical pain or suffering.  The blind man went on to have other pain and struggles.  Even the people that Jesus raised from the dead went on to die again when their bodies wore out.

You see, as good as sight is, the point was never about physical blindness.

Jesus said to him, “do you believe in the Son of Man?”  Confused, the man who is just seeing the world for the first time in his life says, “who is he?  Tell me so that I can believe”.

Jesus looks him in his now-opened eyes and says, “you have seen him”.

Just like that, the purpose of this healing comes into view.  Why did Jesus open this man’s eyes?  Was it to make his life better, to ease his suffering as a beggar on the road?

No, as much as we might wish that was Jesus’ mission.

He opened the man’s eyes so that Jesus could reveal himself.  And then, coming face-to-face with the one who blessed him, who changed his life without even asking, the man says the most important words of his earthly life: “Lord, I believe”.

Suffering, pain, plagues, pandemics, and even death itself are our lot in this fallen world.  God is at work not to give us a life full of sunshine, rainbows, and lollipops; no, God, in Jesus, meets us in the messiness of this world, literally in the mud of the dirty roads, in the fear and uncertainty and masks and gloves and hands raw from sanitizer not to whisk us away, but to show us that when we say “Lord, I believe”, then, whatever we face, we have no reason to fear, for even in the valley of the shadow of death, a valley we’ll all walk, his rod and staff are there to comfort and guide,[3] and what a comfort it is once our eyes are open to see that the same Lord who meets us where we are is the one who has conquered death and the grave and even now has prepared a place for us.  (If it wasn’t Lent, I’d shout Alleluia!).

Eyes to see the Light

But that’s not all. “For once you were darkness, but now you are light.  Live as children of the light”.[4]

If you’ve ever known someone born blind, there’s something remarkable: they don’t think of themselves as being “in the dark”.  What we call “blindness” is simply all they’ve ever known, as their minds and bodies adjust in absolutely incredible ways to interact with the world around them.

Jesus is the light of the world; the whole purpose of God’s revelation is to shine light into the darkness; we’re called to be a well-lit city on a hill guiding travelers in, a lamp lifted high in a dark room to shine into every corner.

But here’s the thing about light.  Light doesn’t change what was there in the darkness.  Light just makes it visible.  Light lets us see things as they really are.

As a kid I can remember waking up, scared in my bed as a terrifying shadow with horns and claws appeared on my wall.  In the dark, it was absolutely horrifying.  But, once the light let me see things as they really are, that life-threatening monster was a pile of laundry with a Power Ranger action figure lying on top.

Jesus said, “for judgment I have come into the world, so that the blind will see and those that see will become blind”.

In our circumstances, even in a pandemic, God gives us opportunities to let the light illuminate the darkness; to let Him open our eyes so that we can get beyond the shadows that we think we understand, and instead see things as God sees them – see things as they really are.

This week, with reacting to the news, the uncertainty of how things will play out, the work of figuring out what it really means to be the church when the doors are closed, God opened my eyes.

Delivering newsletters and public health notices hanging from the doorknobs of those without email, I saw for the first time just how disconnected our world has become through technology.  Having to adjust to the school, the arena, the pool, and the library all being closed, my eyes have been opened once again to just how addicted I can be to “things to do”.  And then again, with no runs to bring the kids home at lunch, to the arena for skating, to the pool for swimming, my eyes were opened to realize that it isn’t the activity that I miss… I’m not missing my swim; I’m missing running into friends and neighbours, chatting to the guy named Danny at the rec centre counter for even 2 minutes.  In the midst of a pandemic, the fault of our fallen world, God has opened my eyes to see what really matters; and, like the blind man, face to face with the one through whom all things were made, at a time like this when — without our permission — everything changes, Jesus stands across from us, looking us in the eyes.

And, as the light pierces through the darkness, letting us see things as they really are, not as we in our blindness think they might be, the time comes for us to say those most important words that we can ever utter:  “My Lord, I believe”.

He doesn’t need our permission to open our eyes… he’s doing it even now.

And, for those with eyes opened, this is an opportunity:
this is the time for us, too, to realize ‘I once was lost, but now I’m found; was blind, but now I see.’

To God be the Glory now and forevermore.  Amen.