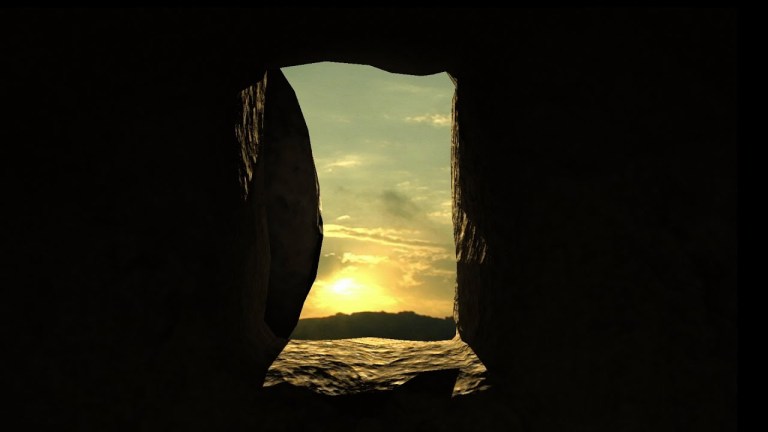 By God’s great mercy he has given us a new birth into a living hope through the resurrection of Jesus Christ from the dead, and into an inheritance that is imperishable, undefiled, and unfading.

As our Easter celebration continues through the 50 days of the Easter Season, today’s lessons give us an opportunity to reflect once more on what it means that our Lord – the Son of God who shared a human body just like ours – would rise from the dead, something, admittedly, very unlike how we have come to expect bodies to act.

After all, even the Lord’s closest companions, those who heard his teachings and saw his mighty works throughout his earthly ministry were shocked on that first Easter day.  Now, they had heard him speak first hand about his death and his promise to rise again; they had heard him speak about the temple – the dwelling place of God on earth – being destroyed and rebuilt in 3 days; they had heard him speak of the deliverance that comes for those who die to self and rise again in the waters of baptism… but even they, conditioned by every other human death ever experienced, walked sorrowing to the tomb to mourn, expecting a lifeless body in a sealed tomb.

And today, of course, we heard that gruesome, even embarrassing account of St. Thomas, that great missionary who took the Gospel East to India, who died for his faith in the Summer of the year 72, who was so shocked at the reports of his 10 closest friends that he demanded to reach out and stick his hand into the gaping wound in Jesus’ side before he would believe that the Son of God had risen from the grave.

No, even for Jesus’ closest disciples, 1st century Jews who believed that bodies would one day be raised to new life, the empty tomb and the resurrected Lord were far from what their human experience would have led them to expect.

After all, if all the millions of bodies, all the billions who have died in human history stay dead, then what are the chances?  Why should this one body be any different?

Unless, of course, that’s the point.

Researchers tell us that, since about 50,000 BC, there have been 108 billion humans.[1]  If any one of those could have overcome that original sin, that original pride which caused us to miss the mark and land in the dust of the grave rather than in eternity sharing God’s endless life, then none of the events of Holy Week would have been necessary.  If there was any other way that we could overcome the grave, then the willing sacrifice of an innocent son is nothing short of horrific.  Or, to paraphrase C.S. Lewis, if any other religion offers a solution to death and the grave; if any other philosophy or moral code can actually work, then a loving Father accepting the sacrifice of an innocent Son in order to adopt the guilty as sons and daughters is a horrific thought… that is, unless this 1 was different; unless we believe what we say and sing: that he only could unlock the gate and let us in.

Yes, when we stop to think about it – as we should from time to time – the glory, the Good News that we proclaim in Easter is that something unique happened in that body in which our flesh was joined to God.

Yes, the odds of a body being resurrected are 108 billion to 1.

But, if we’re true to scripture read through the lenses of faithful tradition and God-given reason, that’s the point: Jesus is the first-fruits of something new; a new creation, the first new shoot springing up from that old stump, onto which we will be grafted if we choose to follow him.  1 in a billion or 1 in a hundred billion is all you need if that one is a new solution, a model, a prototype of what is to come.

And, at the same time, if 108 billion to 1 sound like slim odds for Easter, it’s worth remembering the faith that even modern science asks us to accept.  Secular scientists using the Drake equation tell us that the chances of intelligent life evolving on earth are about 40 trillion to 1, yet none of us doubt that we’re here, in spite of those far slimmer odds.

No, bodies don’t usually rise from the dead, but it only takes one to chart a new course.  It only takes one tiny spark to ignite a wildfire, and in spite of the destruction a fire brings, it’s new life that springs on the other side.

What does it matter?

Jesus’ resurrection – his body not just resuscitated, but transformed and prepared for eternity – matters precisely because our faith proclaims that he is the firstfruits of a new crop: a branch onto which we have been grafted, joining our flesh to God’s endless life.

It matters, in short, because as we read this morning, the Resurrection of Jesus Christ from the Dead is our living hope. Our faith is not in good wishes for a better tomorrow, our faith is not that we can make ourselves better people and do some good in the world; our faith is that we have been made heirs to an inheritance, that we will receive life that is imperishable, undefiled, and unfading – a life being kept, stored up with God until it is ready to be revealed at the last.[2]

For too long, churches have avoided the topic of resurrection precisely because of the slim odds.  The resurrection of a body isn’t something we see.  And certainly even the Gospels record quite candidly the astonishment of even the most faithful followers.

For many faithful churchgoers, we’ve come to a point where the most we can say about the death of even the most faithful Christian is, “well, they’re in a better place”.

But the Resurrection tells us that our faith isn’t about disembodied bliss enjoyed in the clouds; in fact, in spite of some of the familiar revival songs of the 1900s and the sentimental poems of sympathy cards, the Bible and even the Creeds are quite clear that Heaven is not our goal.  We don’t follow Jesus so we can “go to Heaven” when we die.

Rather, as Holy Week and Easter remind us, Jesus promises that those who ask for mercy will wait with him in Paradise, will wait in the many lodging places made ready in the Father’s house until that time when death and the grave are finally defeated, and as one generation passes to the next, we receive our inheritance of resurrected life as we, made like Christ, share in his reign over the new Creation, just as we were intended to have dominion over this world before we turned on God and each other.

We believe in the resurrection of the body – that, as a totally unique event, Jesus returned from the grave with a body unlike any other – a body that bears the marks of suffering, the marks of obedience that make us who we are, but a body that does not tire, does not grow weary, that does not fight against our appetites or our will, and that is made like Him.

In Easter we proclaim that, though we wear out, though we break down, though accidents and diseases happen, we do not fear the grave because we’ve seen the prototype, we’ve seen the revised plans for what we will be on the other side.

Or, as we read: “though you have not seen him, you love him; even though you do not see Jesus now, you believe in him and rejoice … for you are receiving the outcome of your faith, the salvation of your souls”.[3]

Souls created to inhabit bodies; bodies that are re-formed, purified, and strengthened as iron refined in a fire,[4] made ready not to play harps on the clouds, but to live, love, and serve in the perfect City of God, the New Jerusalem that is to come.  Bodies no longer of dust, but clothed with immortality, over which the grave has no power,[5] as the gates that were powerless against the Lord of Life are unable to hold those who share in that risen life by God’s mercy and grace.

Yes, the apostles would agree, resurrection is shocking!  But every great revolution starts somewhere, and every world-changing creation seems downright impossible at the start.

But, in spite of the odds, let’s be clear.  This is our faith: Christ rose, so we will rise;  Christ rose in his body, so we will rise in our bodies; Christ’s flesh, born of a woman, was clothed with immortality, as our feeble bodies will be remade imperishable; and in the meantime, the jaws of death being broken, he has prepared for us a place to wait, longing for that day[6] when we will reign with him as sons and daughters of the King.

This is our faith.

The Lord is Risen Indeed.  Alleluia.

[6] That is, we can at least say that the martyrs await with longing rather than patiently or without a sense of time; there are differences of opinion as to whether martyros here refers to only those who died, or all “witnesses” whose blood was ultimately shed as the result of sin.