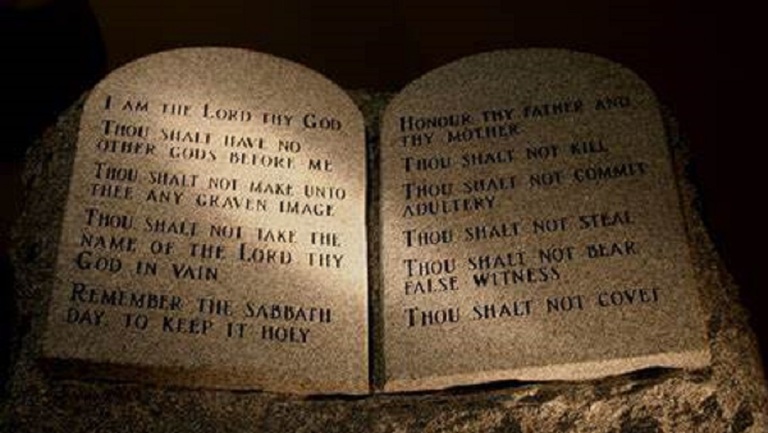 Today The Story takes us to the 10 Commandments.  Now, if you’re like me, you’re thinking “good, this one will be easy – I learned this in Sunday School!”.

After all, the 10 Commandments are foundational, they’re basic, and even if we don’t manage to keep all of them all the time, they’re easy enough to understand; we all know what they mean, right?

Well… yes, they are foundational. From the earliest days of Christianity, the Church has said our faith is summarized in the 10 Commandments, the Lord’s Prayer, and the words that became known as the Apostles’ Creed.

But… as much fun as it would be to give you a little pop quiz and see if we can rhyme off the 10 Commandments here today (and you know me, that would be fun), even if we could all recite them from memory, if you’re like me, it won’t really be helpful, because for as foundational as those 10 Commandments are, I think they’re also the most misunderstood part of the entire Bible.

We read them wrong, because we don’t read them as part of God’s unfolding story.

Here’s what I mean: how many of you – and be honest – were taught by a well-meaning person somewhere along the way that these are the rules we’re expected to follow, and if we follow them, then we will find favour in God’s eyes, he will bless us, and there will be a reward for us in heaven.

It’s ok, be honest.  That’s what I was taught going to Sunday School as a kid.

‘These are the rules.  Following these rules will make you holy.
Follow these rules, do as God commands, and you’ll receive God’s reward.’

But, my friends, we’ve walked together (already this Fall!) from the garden of Eden to the flood, to the calling of a perfectly average Abraham who had trouble trusting God’s promises, to jealous sons wanting to kill each other and selling their own into slavery, to famine, lies, dysfunction, captivity, impatience and disobedience in spite of seeing God’s incredible might, and now, as the Ten Commandments are given, these people through whom the whole world would be blessed have been grumbling, quarrelling, complaining about God’s provision, and we know that, even as these 10 Commandments are being given on the mountain, what are they doing in the desert below?  They’re making a golden calf to bow down and worship with a big party as they polish off the wine they took from Egypt.

We don’t, because that’s not how God operates.

Which means, although the 10 Commandments are foundational, somewhere along the line in the last 250 years since the industrial ic revolution, we messed it up; we got it backwards.

You don’t follow the 10 Commandments to make yourself holy.

No – not at all!  Because we are holy, we follow the 10 Commandments.

Was Moses holy when he murdered a man and ran away as far as he could, escaping the slavery of his own people?  Were the Israelites holy, set apart, saints of God when they sat on the banks of the sea wishing they were still slaves, or when they grumbled in the desert, or when they stood at the base of the mountain, so impatient for God to do the next thing that they make a golden calf?

No.  Because God calls us first.  God reaches out first.

God says “I have a plan for you” first.  God chooses, God elects, God calls us to be his own, to be set apart for a relationship with him rather than broken relationships with a broken world.

That’s the big idea here today: God first says ‘I made you, I love you, I choose you:
so follow my commandments’.

God calls us to be his own, he calls us to trust Him rather than put our trust in things that are passing away, he reaches out to tell us that we are set apart – holy – and, so we should learn to love what he loves, to hate what he hates, to see the world as it really is, and long to follow the commandments of God.

How did we get it so wrong?

I’ll tell you why, though I don’t like it any more than you will: it’s because we like to believe it’s all about ourselves.  If I have something, it’s mine.  If God gives me a gift, it’s for my benefit.  If God called Abraham, good for Abraham; if God calls me, good for me.

But when in this whole story has God called someone for their own sake?  He hasn’t, and He doesn’t; instead, He calls us to be part of what He’s doing.

God doesn’t call us for our own sake.  God – the same yesterday, today, and forever – calls us to be a part of what he’s doing as he heals, restores, and draws us to himself, one faithful person at a time.

God called Abraham so that all the world would be blessed.
God called Israel to be a light to enlighten the nations.
God called the Church to be a brightly shining city on a hill.
God called you to reflect his light, to put it on a lampstand, not to cover it with a basket, so others can find their way back.

And that’s where holiness fits in.

We don’t “be holy” so God will choose us and we receive a reward.

God has chosen us, we have received the ‘inestimable benefit’ of the forgiveness of our sins, and so holiness is our response.  And it’s not for us.  No, as Peter says: it’s because “you are a chosen race, a royal priesthood, a holy nation, a people for his own possession, that you may proclaim the excellencies of him who called you out of darkness and into his marvelous light”, and why do we follow his commands?  Peter says it straight out: “so that… they may see your good deeds and glorify God.”

Do you know what that means?  Being holy is part of our mission.

Holiness, choosing to live as those who have been set apart for God’s glory, isn’t for our benefit, but is for the benefit of the whole world, as we’re invited to work alongside the One True God who is calling all people back into relationship with him.

So what about those Commandments?

Ok, so if that’s true, then how do those 10 rules factor into God’s mission?

As you reflect on Chapter 5 this week, I want you to look at the 10 Commandments in what might be a new way.  Each one reveal something that we long for.  Something that we had in the Garden of Eden, something we were created to enjoy, that was lost because of sin.

Here’s what I mean:

We were created to worship the one true God – so we can have no other gods (commandment 1), even though we long to worship.

We were created to see God face to face – so we can’t make idols (#2), even though we long to see God.

We were created to chat with God as a friend in the cool of the day – so we can’t take his name in vain (#3), even though we long to speak to him.

We were created and long for rest, sabbath – and so we call “rest” holy.

We were created to be and long for a loving family, so we honour father and mother.

We were created to procreate, not take life, so we do no murder.

We were created to have trusting, committed, lasting partnerships, so we do no adultery.

We long for having all that we need, and were created to find all our fulfilment in God, but taking what isn’t ours got us into this mess, and so we do not steal.

And when we stole we lied about it, but we long for justice and truth, so we do not bear false witness.

And it all began because we wanted what wasn’t ours to take, we weren’t happy to trust what God had provided, and ever since we’ve longed to have more and more and more, but that longing can only be fulfilled by the One God who has it all, and that’s why we don’t covet.

Holiness is the reward

And the 10 Commandments are not a test – they’re the furthest thing from it.

They’re our proper response.  Because we are holy, because we have been called and set apart to God’s glory, we will commit to live this way, because the 10 Commandments show us how the world was meant to be, what it was like before sin entered the picture, and give us a foretaste of what it will be like when all things are restored.

The 10 Commandments aren’t a path to holiness – no, they are a reward; living them is a glimpse of what life will be like when God makes all things new.

And, my friends, that glimpse isn’t for you.  Your life, living those 10 Commandments joyfully, reflects God’s light out into the darkness, drawing others in to see that there is a way for those longings are fulfilled: in God, Our Father, who calls each of us to be his own.

To Him be the glory now and forever more. Amen.