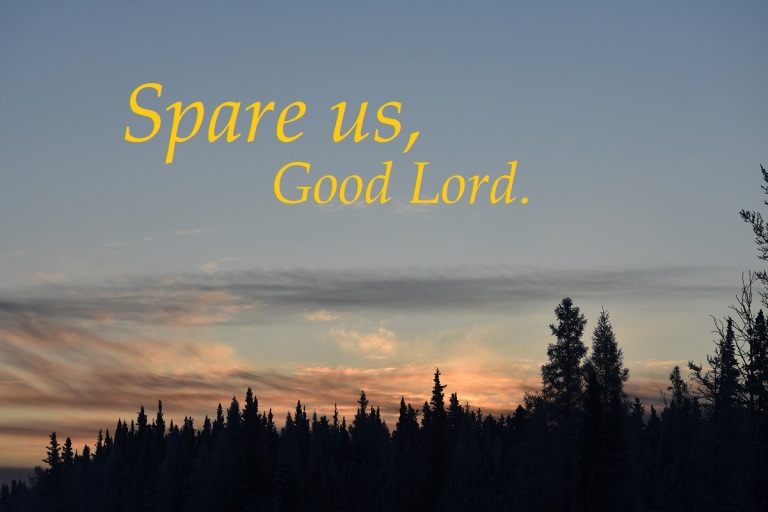 Advent always begins in the dark.[1]

The world around us is quick to throw up lights, isn’t it?  The day after Halloween, even before Remembrance Day, the artificial glow of Christmas lights began to appear.

As the nights start earlier, the sun rises later, and the cold sets in it’s no surprise that we’re quick to search for something – anything, really – to brighten that darkness.  And if we think back 30 or 50 years ago, without even noticing it, that searching, that yearning for a bit of garland, for the comfort of the warm glow from the tree has become so much more intense, hasn’t it?

For so many people, for centuries, the tree would come into the house just in time for Christmas – often on Christmas Eve! – and brighten the home with cheer for the 12 days of celebration, just as the days begin to lighten and the hope of the New Year is around the corner.  Now – in spite of all the comforts and improvements the modern world was supposed to bring us – it seems we want to wish away the last two months of the year as we string up artificial light in an attempt to drive out the deep darkness that so easily crowds in on our lives.

Now, don’t get me wrong – my own Christmas Tree is up… or seeing as Christmas is still almost 4 weeks away, I suppose you could call it an “Advent Bush”, or as one of my friends said on Facebook, it’s an “Anti-Depression Serotonin Shrub”!

But think about it – is that not how the world operates?
There’s a real darkness; a real weight; a real longing; perhaps even a real and deep dis-ease with how things are (or appear to be).  But the world’s response, time after time, is to string up artificial lights!  “If December is dark, string up lights, think positive thoughts, try to forget the hear and now, and pretend it’s already Christmas”.  “If November’s dark, string up some lights, and pretend that’s Christmas too”.

I love Christmas lights, but I believe we have to ask: are we preparing our hearts and homes for the coming of our Lord and King?  That’s a good and holy thing – something we should do all year long.  Or… and only you can know the answer to this – is the world around you inviting you, in the face of all the concern, anxiety, and darkness of today, to pretend it isn’t there, string up artificial lights, and instead of living in and working through the here and now, to let our anxiety simmer under that warm artificial glow, and add tomorrow’s worries and anxieties on top of today’s?

The Season of Advent

It’s become popular to think of Advent as a season for preparation for Christmas.  It’s easy to see how we got that idea – after all, this is the secular season of pretending the darkness isn’t real, and focussing, even obsessing over romanticized, unobtainable visions of what Christmas is supposed to be.

No, Advent is a time of preparation, but not for Christmas.  The word “advent” means “coming”.  And what do we say in the Creed every time we gather?  (What is it?)

On  the third day he rose again… he ascended into heaven and is seated at the right hand of the Father… and he will come again in glory to judge the living and the dead, and his kingdom will have no end.

The Nicene Creed (the Apostles’ Creed omits “in glory”)

My friends, don’t let the artificial lights in my living room fool you – that right there, that line of the creed, is Advent!  That is the coming from which this season gets it’s name.

Advent isn’t about preparing for something long ago in the past.  Advent, this season shrouded by the real darkness of the world around us, is preparation in sure and certain hope that, just as He came once as a helpless babe, bearing the full weight of the world’s oppression and violence, even making himself the willing, innocent victim of death, he will come again, with all the power, and majesty, and awe, and terror of the rightful King who returns to overthrow and finally cast out the powers of death and sin and – though we say this with the humility of those who ourselves will be judged – he comes to call to account both those who heard his voice and worked against the enemy, reflecting his glorious light, keeping those lights burning as beacons on the hills calling lost wanderers in, as well as those who instead chose to follow the propaganda, pretend the darkness isn’t real, and allow their friends and neighbours to stumble, fall, and even be crushed as the weight and shame of yesterday’s failures and tomorrow’s anxiety strip away all hope for today.

That’s Advent.  That’s the Coming.  And this is the season of preparation.

The God who Hides… for our benefit

In Isaiah 64 – like elsewhere in scripture – we read, perhaps surprisingly, of God hiding himself.  Now, of course, we know, fundamentally, that God is active in every time and every place; just think about that – nothing, nothing you’ve done or I’ve done, nothing that has ever taken place is a surprise to God; He’s already seen it all first hand, for nothing exists without him.

Yet, as we know from scripture, God’s desire is to be really present with us in a way that we can recognize; He desires to be present so that we can know him fully and He can know us.

And so, at various times and places, as we read this morning, God has hidden his face.  As we heard today “We all have become like one who is unclean, and all our righteous deeds are like a filthy cloth … this is no one who calls on your name, or attempts to take hold of you, for you hidden your face from us, and have delivered us into the hand of our iniquity” (see Isaiah 64:1-9).  Let’s be clear – it’s not that God abandons us.  It’s the opposite — look at the world around us: if he were to show forth His glory, ‘oh Lord, who could stand?’

So on the one hand, the church cries out in the darkness of Advent, “O Lord, come quickly!”.  Really, you might say that we’ve been in Advent since March this year, crying out for a deliverer, stumbling in the darkness, praying that God would display his power and set things right.

I would say all of us hope for that new tomorrow, all of us yearn for that coming day with the new creation, when we will be reunited with those we love, when sorrow and sighing and death are no more.

But at the same time, if the Lord came in his glory with his angels, the heavens torn open and the mountains quake as the consuming fire of God comes among us, are we ready?

Yes, “Lord, come quickly”, but as St. Paul wrote to the Philippians, “yes, I want to be with the Lord, which will be far better indeed”, but there is still work to be done, it is more necessary that we remain and proclaim the Gospel so that at his coming, Christ will be glorified (Philippians 1:23-28).

Like Abraham pleading for the great city, like the message of Jonah warning Ninevah of the need to repent, like the prophets calling Israel to repent and return to the Lord, we’ve been commissioned to carry that eternal, in-dwelling light out to a world that is content to string up artificial lights and pretend that all is well, pressing down, hiding away the real darkness and pain, and escaping reality with Christmas movies, scrolling stories on Facebook and Instagram, racing home to make invisible online friends based on a carefully-crafted profile, layer after layer offered by the world to avoid actually dealing with the root problems of isolation and shame and inadequacy that crowd in like deep darkness and slowly make us brittle as the life-sapping cold seeps in.

Yes, “Lord, come quickly”, yet, as we sang not long ago, we face a task unfinished that must and should drive us to our knees before the Lord.  When the advent – the coming for which we deeply long – finally appears, at that day and hour that no one knows, but for which we must always be ready, are we, commissioned messengers of that Good News, ready to stand and give an account for our work?

As one called to carry the light out into the darkness, I eagerly await the dawning of that great and terrible day, but at the same time, Lord have mercy.  The world is a mess.  Good Lord, deliver us.  But our churches, and Christians, have done as much to harm the message of that Good News as we have done to spread it; oppression, violence, segregation, and slothful ease as Christians everywhere rest content while souls around us stumble forth into the night while we’ve hid our lamps under bushel baskets, or put shades up to the window lest the wandering, weary traveller might actually come in, for which we must cry, simply, spare us, good Lord.

There’s Work to be Done.
Spare us, good Lord!

Yes, the Lord is King.  Yes, the King is Coming.  Yes, we’re the messengers of the good news.  And it’s a message so important precisely because the darkness is real.

No amount of happy thoughts, no amount of cheap garland or flashing artificial lights can drive it out, not if we start in November, or put them up at Halloween, not even if we kept them up all year.  The only solution is that sure and certain hope, that deep gift of faith in the core of your being that knows that Christ is King, as you yourself become a beacon of Christ’s light, as we begin to decrease so it’s not about us, but about Christ in me – the hope of glory, as nations stream to that light, and kings to the brightness of that dawning.

My friends, this is a season of preparation… but don’t be fooled.  We’re not preparing for Christmas; we’re preparing for the advent, the coming of Christ among us, when he comes to judge the living and the dead, yet as one who shares our humanity, born humbly, oppressed, becoming victim to death and worldly power, returning to finally conquer those rebellious forces and, as the world is consumed before the fire of God’s presence, it becomes evident if we’ve been clinging to the world’s power as it is cast away, or if, in the face of sin, darkness, despair, and our own weakness, we stand firm in Christ alone, as all the other ground of sinking sand passes away around us.

And, by God’s grace, as we stand in him alone, we will have brought with us family – husbands, wives, children, grandchildren – friends, neighbours stumbling in the world’s darkness, even strangers crushed by the weight of the world.

[1] This is a beloved line and idea borrowed from Fleming Rutledge.